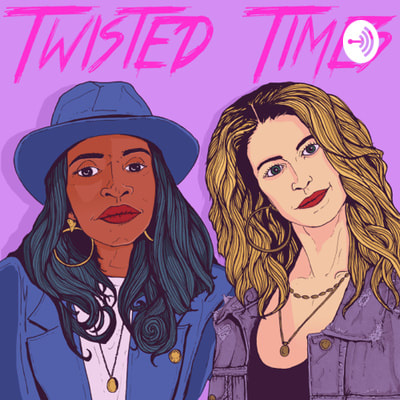 Do you miss Kathie Lee and Hoda? Cece and Ryan do. They’re actors. Writers. They’re Ebony and Ivory. They’re drinkers, thinkers. They met as dreamers and are still dreaming...examining their pillow. How do they navigate these Twisted Times with curious minds? Join them as they talk to unique and influential women about their journey and how they made their dreams come true. Or did they? Grab a drink!
IG: @twistedtimesapodcast
Cece King: @_ceceking
Ryan Jillian: @msryanjillian
Www.twistedvalleyfilms.com
​
Aneesh Sheth is a singer, actress, producer, director, writer, and transgender activist. Born in Pune, India and relocating to the United States at an early age.Her network debut as a guest star was on NBC's Thursday night sitcom Outsourced (2011) and has since appeared in Hulu's Difficult People, HBO's High Maintenance and NBC's New Amsterdam. She also had a cameo in IFC's A Kid Like Jake, Netflix’s Marvel series, Jessica Jones. she is also an event host, panelist and committee member with many national organizations. In March 2013, Advocate Magazine honored Aneesh Sheth on their 40 Under 40 List and in January 2020 she became the recipient of the HRC Visibility Award in Cincinnati.
Adam Odsess-Rubin (Artistic Director of the national queer theater in nyc. He is a director, playwright, actor, and teaching artist. At National Queer Theater , Odsess-Rubin directed his play DREAMers (NYU), based on interviews with undocumented LGBTQ youth in Queens, NY, for which he received the title ‘Emerging Playwright’ from Theater for the New City and Pint-Sized Plays at The Eagle NYC. He also wrote and directed Speechless (Theaterlab), a play exploring HIV narratives in 2018, to sold out audiences. He produced the Queer Village Reading Series and Criminal Queerness Festival. Formerly the Education and Community Programs Fellow at the American Conservatory Theater, Adam is now a Masters student at NYU in the Educational Theatre department. In 2017, he was nominated for Bay Area Theater Critics Circle and Theatre Bay Area awards.
⚡️Twisted Times Podcast⚡️We are continuing our support of @Blacklivesmatter
This episode we chose to highlight @nationalqueertheater and @trevorproject who are creating spaces for safety and education both in the black and LGBTQ communities.
Shout out to @sageusa @new_alternatives_nyc and @Pflag// PRIDE Episodes air weekly @ 3PM PST/6PM EST
Subscribe Today! @itunes @spotify @google @iheartradio @twistedvalleyfilms
Make sure to follow us on our @youtube channel Twisted Times A Podcast. For weekly Happy Hours.