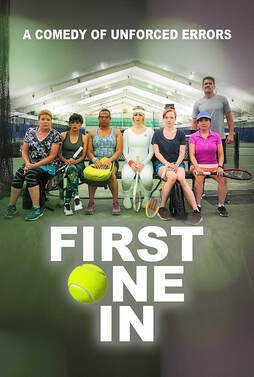 FIRST ONE IN is set to release on major VOD/Digital platforms including Amazon, iTunes, and Google Play beginning Tuesday, September 8, 2020.

After accidentally killing an endangered animal on a popular reality TV show, Madi Cooke (Kat Foster) is labeled an eco-terrorist, is fired from her job, and believes she now is the most hated woman in America. She changes her look and last name to interview with Bobbi (Georgia King), who heads Mason Agents — the #1 real estate firm in Connecticut. But in an effort to maintain championship status in a local, annual tournament, Bobbi only hires women who play tennis.

In a twist of events, Madi and her underdogs take on Bobbi’s Mason Agents at their Elite tennis club, where Madi will find her grit or lose everything.

“During the day in tennis clubs across America, millions of women gather to hit balls at each other. I’m one of them,” says O’Brien. “We wear trendy outfits, visors, and elbow and knee braces. We drink coconut water and eat protein bars and take acetaminophen. We are middle-aged women of all shapes, sizes, and athletic ability. Our personal lives may differ from one another, but on some 250,000 courts in the U.S., we’re all tennis players. Many of us aren’t good, but the competition is as fierce as the pros, sort of, and it’s fun material for a screenplay.”

August 19, 2020
First One In: Comic Look at Tennis Wars- TennisNow.com

August 19, 2020
Exclusive: New trailer and poster for tennis comedy FIRST ONE IN!- Moviehole.net